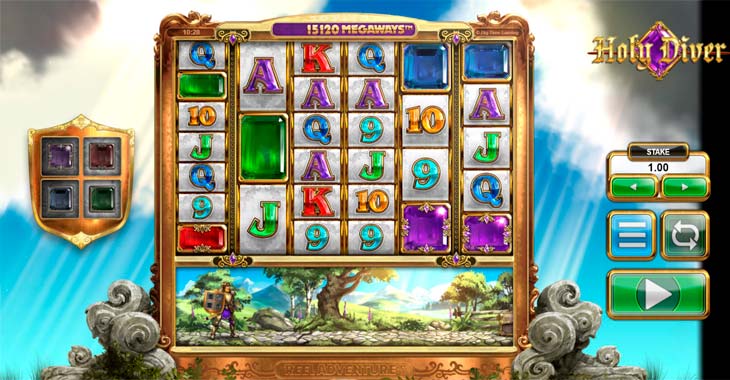 Holy Diver slot machine was released by Australian developer Big Time Gaming. The slot is based on a popular song of the same name by rock musician Ronnie James Dio (ex-Black Sabath vocalist).

The plot of the slot was taken clip, in which the singer plays the role of a medieval barbarian. Therefore, the game will appeal not only to fans of the singer and music lovers, but also fans of unusual, mysterious and mystical. The BTG product is designed in the classic style reminiscent of the first computer games.

“Holy Diver” has a game on six reels, which have no active prize lines. To account for winning combinations uses the Megaways system, patented by the provider himself BTG. It accrues payments for the same picture, falling on adjacent reels. Counting combinations always starts with the picture on the first reel. The number of active sequences depends on the number of symbols appearing on the screen. The maximum number of active lines on the screen is 117649 combinations in the main game. Therefore, the bet is taken not per line, but per rotation of the reels. The range of amounts ranges from 0.1 to 20 euros.

Holy Diver slot is characterized by the varying number of symbols that can be on the screen at the same time. This is due to the different heights of pictures. For example, on one reel can appear from 1 to 7 pictures at the same time.

Winnings depend on the amount bet, as well as multipliers provided for the prize combination in Holy Diver slot. Doubling game in the Holy Diver slot is not provided. Dropped winnings are immediately transferred to the balance of the player.

Basic pictures provided ten. On the reels you can see four gems, as well as six pictures of playing cards. The symbols can expand to the entire reel, but they are still one symbol. Therefore, we are not talking about stacking. Special symbol only one – the wild. He falls during the bonus features and can make additional multipliers active. 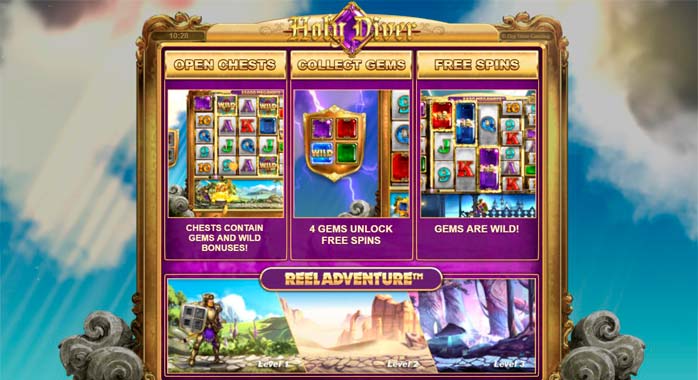 The main character of an unusual slot machine runs on a small screen, which is drawn at the bottom of the playing field. After each rotation of the drums is the player moves to the right. If the hero comes across chests, he breaks them and receives prizes. There are the following bonuses:

On the left side of the slot screen is a picture of the shield. It is carved in four positions for stones of different colors. If the hero finds the missing gem in the chest, it will automatically be fixed on the shield. When all four boxes are filled with colored stones, the gamer gets free spins.

This slot machine will appeal to fans of slots with nonstandard features and unusual bonus game.